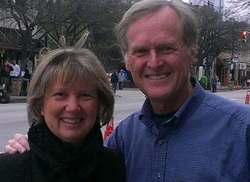 Bill and Patti Carico are the owners, and when they are in town they live in the main level of guest house.  As you can read from the guest's comments, they know how to make themselves scarce so guests feel like they have the property all to themselves.   Bill is an ordained Baptist minister with an IT background, and Patti is a realtor.

The main house was built in 1909 and restored in 1985.  The contractor did a fabulous job on the restoration. The most frequent comment by guests upon arrival is "Its even prettier than the pictures you have online!" That's because a camera doesn't capture the spaciousness, the high ceilings, and the overall stateliness of the property.
Legend has it that the original home was built in 1845. That house burned, and the home you see now was re-built in 1909 on the same foundation.   A Concord native born in the 1920's claims that the house came from Sears Roebuck.   Online research reveals some smaller houses sold by Sears and indeed the style is very similar so its plausible they did a "customization" to create the large house.  Its also plausible that the railroad at that time came right by the back of the property.

In mid-1980's the house was purchased and renovated by Burleigh Construction and they did a fabulous job installing new electric and plumbing, and replaced plaster with drywall.  Main floor additions included the master BR with bath, and the laundry room (added where a wrap-around porch once existed which was both upper and lower). The existing back porch, the garage and guest house are also additions.

Notable furniture is the armoire in the downstairs master that came from Hotel Roanoke, secretary's desk in entry hallway which dates to 1700's, the green antique sofa upstairs is a Duncan Phyfe, and the oak kitchen table was made by Bill's grandfather.

The Carico's bought the home in Aug of 2010,  put ads online on vrbo.com  #330270  and home
and offered it as a vacation rental starting at Christmas time that year. As it turns out, since the property can accommodate large groups comfortably, and since it is centrally located along the mid-Atlantic coast, Concord Manor quickly became a popular gathering place for family reunions and weddings.   We have been honored to host guests from 35 states and over 20 countries.
Powered by